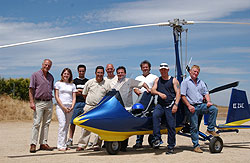 The North West Gyroplane Club was founded by Roger in 1995 and is very much the club of Lake District Gyroplanes. Apart from fulfilling the need to have a club as part of the training organisation the club also promotes fly-ins,but more particularly fly-outs.Notable fly-outs in past years have been a whole ‘squadron’ of both two seat and single seat gyroplanes making the journey to PFA Rallies both at Cranfield and latterly,Kemble – not to mention Wallis Days. With the introduction of modern two seaters,including the ELA we hope to take part in visits to all corners of the UK and Ireland – and beyond,in the future.

The club is open to anyone with a passion for gyroplanes,whether they fly them or not.We also want to retain as many single seat gyroplane owner/pilots – many of whom seem to have disappeared over the past couple of years,as the market seems to have rushed toward two seat MT03’s over this same period. Whilst the advent of modern,highly efficient twin seaters like ELA,Magni and MT is to be welcomed and indeed is hugely important,allowing as they do,much more efficient and focussed flying training,the UK gyroplane community and movement owes it’s origins to the variety of single seaters that have been available over very many years – many of which were built as kits by their respective owners.So whilst there is no doubt that we need modern types of gyroplane,the NWGC sees no reason why both traditional single seat flyers and builders should not share the gyroplane stage with their more modern(and very expensive)factory-built,two seater counterparts.