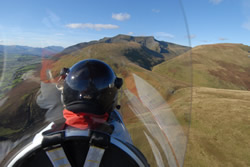 Juan de la Cierva is generally recognised as the inventor of the autogyro way back in 1920.An autogyro,gyroplane or gyrocopter – call it what you like – has a rotor as a wing which,when rotating,provides both lift to keep the aircraft airborne and an aerodynamic phenomina called ‘autorotative force’ which actually drives the blades around.

Cierva saw the rotating wing as a means of flying very slowly if required and also have the ability to take off and land in relatively small areas and from ground which may also be unprepared as a runway in the conventional sense.His original designs were based on an old world war one Avro 504 bi-plane fuselage,using stub wings with conventional airlons for roll control and elevator and rudder for pitch and yaw control.The rotor above was fixed.

Early designs however had a severe tendency to roll one way when airborne and,searching for a clue to this unhappy charactaristic,Cierva discovered that the rolling effect was due to the unequal lift forces produced by the blades at different points as they move around their circular path – or to use a more modern expaination,’dyssymentry of lift’ – meaning that the blade advancing into the airflow would produce more lift than it’s counterpart on the opposite side,moving away from the direction of airflow. 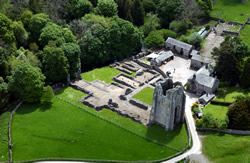 it’s own equlibrum of lift.This again in modern jargon is known as flapping to equality,meaning there is a balance between differing values of both airspeed and angles of attack of all blades as it moves around it’s circular pattern.This,together with Cierva’s later refinement of a ‘drag’ hinge,allowing blades to hunt for a position where forces become equal,perfected autogyro flight.

This discovery also allowed the later development of the fully articulated rotorhead,used in helicopter design.

In the mid twenties,Cierva moved to England and it is here that most autogyro development continued,though Cierva designs were licence-built in many other countries.

Besides civilian use,autogyros were used by the military.The RAF had a squadron of them for radar calibration during the war,the Japanese used them for naval spotting and bombing and the Germans used them to spot ‘over the horizon whilst U-Boats were surfaced to charge their batteries and therefore vulnerable to surface vessel attack.

Cierva’s last remaining breakthrough,before his untimely death in an airliner crash at Croydon,was the perfection of the ‘jump-takeoff’ which involved a fairly crude form of collective pitch control of the blades,allowing the aircraft to jump 30 or 40 feet into the air before forward flight was achieved by thrust from the engine driven propeller,the pitch of the blades reduced so autorotation could be achieved.

Ironically all these developments signalled the end of the autogyro as a flying tool.This brilliant research had actually led to the threshold of the age of the helicopter.All the important spadework had been accomplished;the principal of autorotation,efficient and reliable rotor blades,highly perfected rotorheads and the control of rotor pitch. 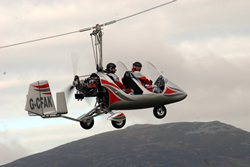 The pressure of wartime aviation development led to the dawn of the helicopter,with a driven rotor and a secondary rotor at the tail to control the effects of torque,a layout familiar today.

Pure Autogyro development disappeared almost totally after the war,apart that is,from what are known as ‘composite’ aircraft.Essentially these are aircraft that use both a rotor for the slow speed part of the flight ‘envelope’ and a fixed wing to cater for higher speeds – one of the best known of these was the highly advanced Fairey ‘RotorDyne’,back in the 1950’s.Since then almost all commercial and military rotorcraft development has centred around the helicopter – though watch this space,because again,designers are looking at the composite ‘model’ as a commercial means of higher speeds,higher payloads and lower operating costs!

However,this period was the birth of sport autogyro flying,thanks to early experiments by Igor Bensen in the USA,using a seat and engine mounted in a basic mast,keel and axle system.The Bensen is still flying today in considerable numbers,both as an open-frame machine and also a a rather more refined,streamline podded version like the Montgomerie-Merlin.All modern autogyros or gyroplanes still use the same basic layout and in the last decade in particular,we have seen the introduction of a number of viable two seat,dual control gyroplanes and together with the advent of modern designs and materials,like carbon fibres and lightweight,efficient four-stroke engines – the future of sport gyroplane aviation is now enjoying a rapid growth in popularity.

Some years agoVittorio Magni produced the wonderful M16 twin seat,dual control trainer,which,once converted to Rotax 914 power,became a superb aircraft and RS Gyroplanes was the first to convert the M16 to Rotax power,in the UK and has been operating two of them for some years. 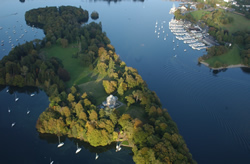 In more recent years,ELA Aviacion of Spain has developed the equally brilliant ELA 07 series of gyroplanes,being geometrically very similar to the M16.The seating is tandem in order to reduce the effects of drag and adverse effects of yaw,compared with most side by side machines.There is also a German copy of the ELA . Due to their layout,which includes a long ‘moment arm’ and large tail feathers to dampen any effects of undesirable pitching and a close relationship between verical centre of gravity and propeller thrust-lines,make them inherently stable machines and a delight to fly.

The future development of gyroplanes is almost limitless.Most manufacturers are now planning a fully enclosed version of their current ‘open cockpit models – or even completely new designs.Several including Magni and Cellier aviation have already started to manufacter this type of gyroplane.

In the future we may even see sport gyroplanes of two or three seats incorporating a ‘jump-takeoff’ system.

In the meantime however,gyroplanes are really starting to lead the way,having spent many past years as the ‘Cinderella’ of light sport aviation.

They are hugely more stable than their fixed wing counterparts and can cope with rough air conditions much better than almost anything else around.They have a very short take off and landing capability and the real fun comes in operating them from as near your home as possible.They do not nead a long runway,nor do they need a hard runway of concrete or tarmac.All they really need as a field with a reasonably smooth surface from which to operate.They are essentially,very easy to fly – particularly compared with the helicopter.

They are however not a helicopter, though unlike a helicopter,are one of the cheapest types of aircraft to own and operate.

Roger would be delighted to give you an air experience flight in one of our modern twin seat gyroplanes, from our own airstrip at Berrier, less than 10 minutes drive along the A66 from Junction 40 of the M6 in Cumbria.